I arrived at Tonopah village and fell asleep to dinner at the free RV parking lot here.

I left the Alkali Flat hot spring the next morning and unpacked on the way, I arrived at the hot spring at 20 km from the new road.

I thought there was nobody in the desert where there was no humanity. One man was smoking and climbing out of the car. I thought it was all alone, but the young woman was embarrassed for a while in the bathtub with her body, but I thought it would be better to turn around, so I went to the hot spring next to it and took a hand in the water and looked at the temperature and talked with the man.

I could not get to where the naked lady was, so I left for another natural hot spring, which I found out 50 yards away from here. It was a unpacked road that came by the side of road 95 and came through a new road, which was packed in its entirety.

The navigation says to enter here, but the road is not visible. It will enter the four-wheel drive, but it is a place where you can not go into the rear-wheel drive van. 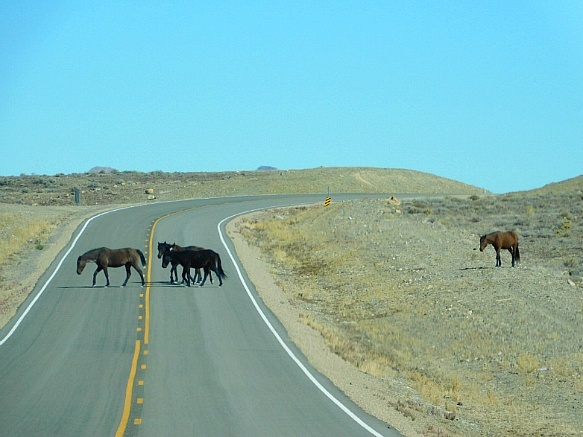 Back to the alkaline paddle bath, there were wild horses everywhere living without their masters.

On the way back, the man and woman had already finished the bath and were drying the body behind the car on the hill, changing clothes in a slow motion.

They are now on the hill, now my world, wearing only panties, they went into the hot spring.

The temperature of the water was moderately hot, and I sat down and repeatedly waking up, and a few days in the new cold, it was time for all the fatigue in this place to be released.

A mere hundred meters away, the mule came to drink water and looked at the stranger with eyes of the border.

The mule relieved and drank water and left.

A man and a woman from Boston called a trip to the northern part of San Francisco with a dog, arrived in the minivan with travel equipment, left goodbye and soon left.

I did a bath in the place where no one was there, and I did laundry from another bathtub, but it was soaked in hot water for a while, and then I ended up rinsing it.

A kind person writes the temperature on the iron column and picks it up from different temperatures.

Because there is no human in the backyard, I cooked rice, boiled the stew, ate it, and went around alone. 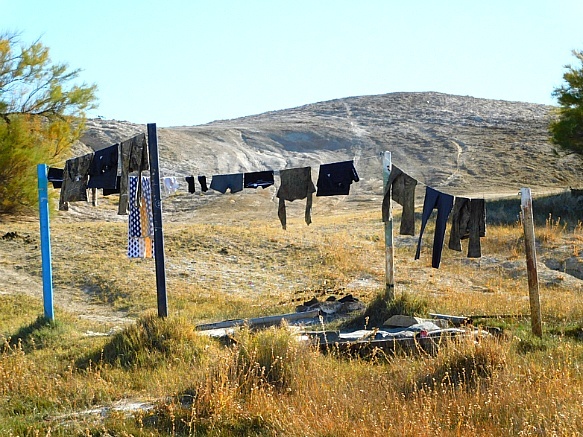 It was the first and quietest place to be alone in a natural hot spring, and it was a free and good environment.

When it was evening, Scott came and greeted me in the first place and conversation started. He introduced the owner of the land here and the master of the gold mine that had been passed down by his father a long time ago, and this place was the property of this friend.

He showed him to be a Trump supporter by opening the lid of his fuel tank to watch his car, a strong supporter of Trump. He expressed his enthusiasm for being a very good business president, saying that he was doing so well in politics, and he said he would play a very big role in America's national interests as a very strong policy to hold China to expand.

His pick-up truck was a 6'700 cc petrol engine, two superchargers attached to a truck that was fuel-efficient and about twice the strength.

It is equipped with a special suspension and the large tires make it convenient for going through the desert and mountain trails.

According to Scott's description, this was an economically active site centered around the nearby Tonopa village, where gold mines were activated in the 1920s, and the hot springs resort was operated as a large resort. Place.

It was the land that was inherited by his father, and one day he would redevelop the mine and make a new spa here. He was feeling a little weak, but his personality was good, and it was the constitution to tolerate the cold that is unique to Western people to speak for long while naked in the cold evenings weather.

When I talked to Scott, three people came in here with a server van, and when I saw Scott, I came back and came back and Scott came down and I came down. In conversation with them, he tells him that he is the owner of the land here.

A friend of a woman, a husband and a husband. Three of them were a party. I became a conversation partner with them. A man who looked like a gold coin took off his clothes and went into a hot spring. I would have enjoyed it if I walked through a room, but I immersed myself in the water, and then I went into the hot spring with my naked body, without leaving a dull fifty year old woman.

Then I took off my husband and sat down at the entrance of the small bathtub. I went out to the car to use it as a writing service. I took the camera out of the car window and pressed the shutter to the evening sunlight. The state of the picture was like this.

It would have been completely covered with mosaic, but it was dim, so I did not have to do it again. I walked out of the car again, sat in the bathtub, sat on the carpet and continued conversation with them.

It was natural to be embarrassed for a while, but when three people came in with a friend of my husband, it was so wonderful to take a bath as a child in a small hot spring filled with water. But the couple did not mind, The woman sat in front of me and spoke to me, and her husband sat down and continued conversation.

Last year, six uninvited guests from a natural hot spring in the Colorado Valley water came to a conversation and talk about a man sitting next to a young woman from Alabama. They all laugh and naturally tell them to take off and bathe like children. I also brought out the story of men and women in El Dorado Hot Springs, Arizona …

When I was a child, I went back to my old memories of bathing nakshan in the Munsan Stream. I felt that they were not mistaken, but that there was a problem with the stereotypical thinking of people living in modern life. I told a friend from Korea that I was from Korea that I was in Arizona and talked to a naked man in Colorado and said that they would never be able to say that it is a difference between culture and idea apart from right and wrong.

If culture is different and thoughts are different, it is difficult to narrow the gap of thought, only the custom of the world to which it belongs is right, and others have the prejudice of being wrong, but it is not right or wrong. The day was dark and it was cold, and I was writing light and writing in the car. When three people were leaving, they greeted me with a loud voice saying that I could not see my face to say hello.

I got up the next morning and went to the hot spring swimming pool a hundred years ago, and now it was hot enough to swim because of the warm water flowing from above, and some geese came swimming in the grass. 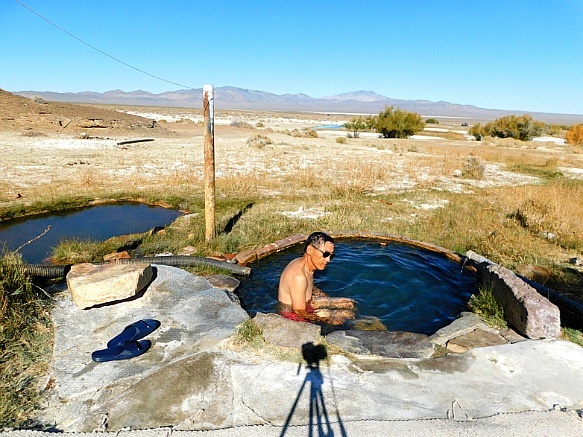 There was no human in the backyard, and all the time was a quiet night, a holy night, and underwear, but the most freely in the world came into the hot spring.

The deepest place is below the waist, and the place where it enters is two stairs.

The mule came back in the morning, drank the water, and asked the three men who came here yesterday, all of whom are wild animals with no owners.

Two horses came to drink water, and everyone drank water from the hot springs here spread to spread cold water.

I did not want to leave this hot water place, but I visited it for the first time and it is not much different from going to drink next door, no matter how big the American continent is. 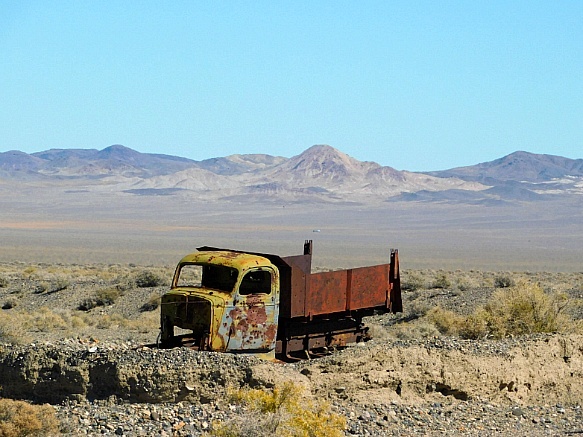 The vans that used to be used at the time of the mine's activation in the past were left rusted with the memories of old days, but they left a trace of memories in the deserted desert and seemed to see a wide picture with the scenery. If I was not in a deep hole, I was going to cross, but I left because I could not go.

I went to a hot place from a cold place to a snow storm, and Teton National Park was so cold that I was going to the south. I decided to stay in a warm place for a while and decide on my future destination. The north of the continent is already long since the beginning of the winter, and the south is hot, so you need to find the season.

I do not have anything to do with it, but it is a time-consuming day to write again because the writing I wrote has become a bitterly filtered and all the letters are broken.

View all posts by allen

This site uses Akismet to reduce spam. Learn how your comment data is processed.